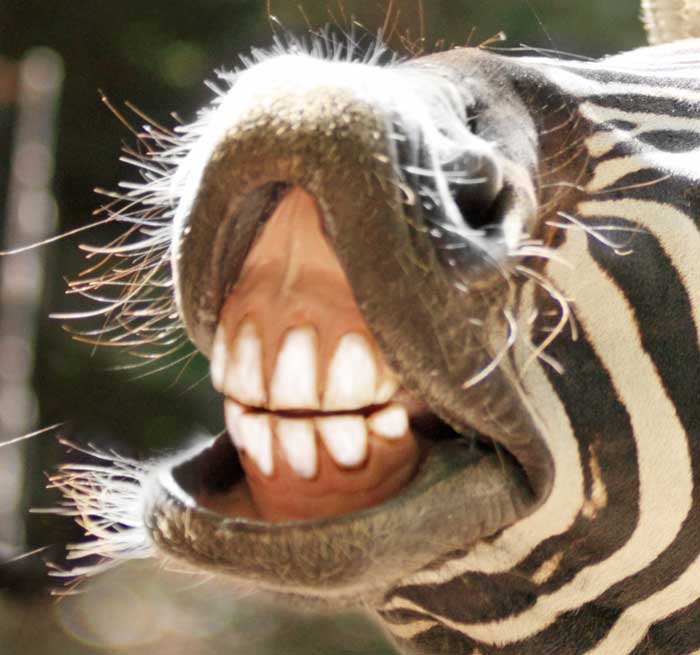 You can tell a dolphin’s age by simply counting the rings in just one tooth? After each year passes in a dolphins life, a layer of bone grows on each of their teeth. Unlike our human teeth, dolphin teeth will never fall out—their first set of teeth they have at birth is permanent, they will never lose them. And funny enough, dolphins don’t actually use their teeth for chewing; they use them as a defense mechanism to ward off predators! Instead of chewing their food, they swallow their food whole to prevent bones and scales from catching in their throats.

Lions are born with mouths as empty as baby humans, but their first teeth, which are called milk teeth, start to appear at 3 weeks old. Because of this, lion mothers don’t wean their cubs until 2 or 3 months old. Eventually, they will acquire 30 teeth in their full lifetime.

Have you ever wondered if there are animals somewhere out there with the same number of teeth as we have, well look no further. Giraffes have 32 teeth too! The exact same number as humans! Except giraffes have a much longer tongue, which they use to pull leaves into their mouths before chewing. They sort of use their tongue like we would use a fork.

Hippos, when they reach adulthood, have 36 teeth altogether…but because some hippos keep their milk teeth long into adulthood, hippos can have as many as 40 teeth at one time. That’s a lot of teeth, but if you look at the size of a hippo, you’d quickly realize that they need every single one of their teeth for the amount of food they consume on a daily basis. Their largest teeth are called tusks, formally called canines. Can you imagine if human canines were that long? We would look pretty funny.

Both alligators and crocodiles are in the same animal family, the family is referred to as “crocodilians.” All crocodilians have teeth that replace themselves when they fall out, so both alligators and crocodiles often have as many as 3,000 teeth in their lifetimes. And their teeth are actually hollow. Even though their hollow, I wouldn’t want to mess with 3,000 of them at once! OUCH!

Elephant tusks are, like in hippos, actually teeth. They are enlarged teeth at the front of the mouth. Tusks never stop growing, so if they never stop growing, you can imagine how long they can actually get.. Since elephants have been hunted for ivory for years, the length of tusks is diminishing as the elephants with the “big tusk gene” are killed more frequently. This is why it must stop!

Shark teeth are similar to crocodilian teeth in that they grow teeth back right after one falls out. However, sharks grow far more teeth in their lifetimes—they may have up to 20,000 teeth by the time they die! I think after knowing this, I would rather get tangled up with a croc or an alligator than a shark with 20,000 teeth. That must be where they got their nickname “Jaws” from.